Let’s start this entry with a big “Sigh.” Yes, it’s been a couple of weeks since my last entry. And, that’s with good reason. 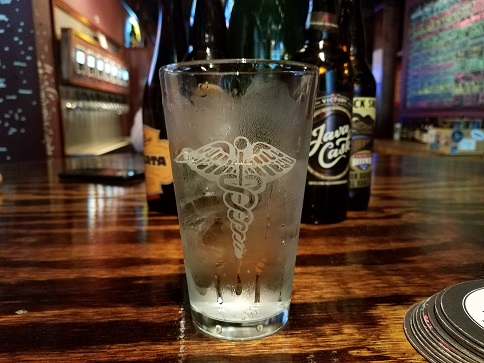 Last week, I was placed on a medical ban for Alcohol and Caffeine. Hopefully, that will be temporary. As I said to one of my co-workers, “It’s hurting my blog.” Hahaha. What sucks even more is that one of my favorite types of beers is a Coffee Porter. Gee, Alcohol and Caffeine in the same drink, double whammy. Needless to say, I have been resisting temptation and hopefully will get some answers on Friday about how to lift the ban.

Anyway, I was with a couple of the guys at the Tap Room, last Thursday, watching them drink, while I was relegated to sipping on a Sprite for the evening. Sarah the bartender, intentionally(?), served my drink in a pretty neat glass. I thought the branding of the glass was hilarious and very apropos. It was actually so awesome that I have been sharing the picture with everyone who has ever been drinking with me. Everyone agrees to the awesomeness. Kudos Sarah.

On a sadder note, the Tap Room has lost their GM, Hal, to a great opportunity elsewhere in the State of Florida. I was glad that I made it to the bar on Monday to see him off. Hal like all of the bartenders at the Tap Room have a great passion for beer, always friendly to questions and conversations, and come across as good people. Going to miss discussing beers (and other things) with him, and trying to gain new perspectives on how to think of and describe beer. Cheers Hal.

So, the Mantle of GM for the Tap Room has fallen to Ben. I haven’t talked with Ben as much as I have Hal or Sarah, but enough to say that I think he will do well. Talking to him, he already maintains the 7th Hill Tap Room Facebook page, and he says that he has some plans to finish off many of the partial kegs in their cooler. It’s going to be interesting to see where the next couple of months take the Tap Room. Congrats Ben.

Unfortunately, there’s nothing else to write about. If the ban is prolonged, I may take up visiting breweries and interviewing brewers. After 22 blog posts in, I don’t want to give up on sharing information.