On Thursday, we had a treat at the 7th Hill Taproom. They had a Launch party for Bowigens Beer Company. 7th Hill was the second place in Tallahassee to feature beers from Bowigens. To accompany the launch, one of the owners, Bobby, was there to answer questions and talk turkey. Bowigens is located in Casselberry, Florida, which is near Orlando.

If you look at the logo, there is a guitar neck as the stem of the hops. Bobby was saying that he and his partner were both musicians in separate bands, before they started Bowigens. I have to admit that it was pretty cool to have Bobby sit with us for a good 30 minutes to talk about beer. If I had been a little more savvy, I would have taken notes and written it up as an interview. I want to thank Bobby for his time and entertaining us.

Here are the four beers from Bowigens.

The 7 Layer Stout was a solid stout. The stout is fairly no-frills, and exemplifies what you expect a stout to be. I ended up drinking the most of this one beer, that night. The beer presented as dark with a light creamy mocha head. The aroma was a wonderful dark roasted malt with a light smoke and a hint of chocolate. The flavor was a rich smoky malt, which exemplifies a stout, and perhaps a little extra sweetness.

Working the way down the list, next is TrHOPical Fusion. The Double IPA was pretty good, a solid representative of the IPA family. The beer was a clear golden with a creamy white head. The aroma was citrus first with hints of hops and a slight bitterness. Based on the aroma, I was expecting citrus to be the primary flavor. However, the hops and bitterness dominated with a hint of citrus in the finish.

Of the four beers brought out by Bowigens, this one was the one that I was most disappointed in. The beer poured a cloudy medium gold with a white head. The aroma was a very light hop with a slight hint of citrus. The taste was a very mild tangerine. In all, the beer was very light with very mild flavors. I may have to try this one again to see if I get the same effect. 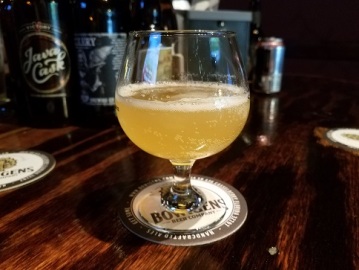 Bobby was telling us that What the Fuss is based on one of the Employee’s beers. The original beer was a Cotton Candy Berliner, which used Cotton Candy Grapes for flavoring. Unfortunately, the grapes are only available for a few weeks out of the year, and they had to use Kiwi Fruit instead. This made for an interesting beer. The beer was a yellow gold with a light white head. The aroma was recognizably sour with notes of fruitiness. The flavor was a tart fruity flavor with clear notes of kiwi fruit. Of all the beers that night, this one was probably my favorite.

Bowigens presented a solid line up. The surprise for me was the Kiwi Berliner, which edged out the Milk Stout as my favorite beer of the night. It was a tough choice. I look forward to meeting Bobby again, if me and the guys ever get around to creating the Great Florida Beer Trail. I will save that writeup for another day.